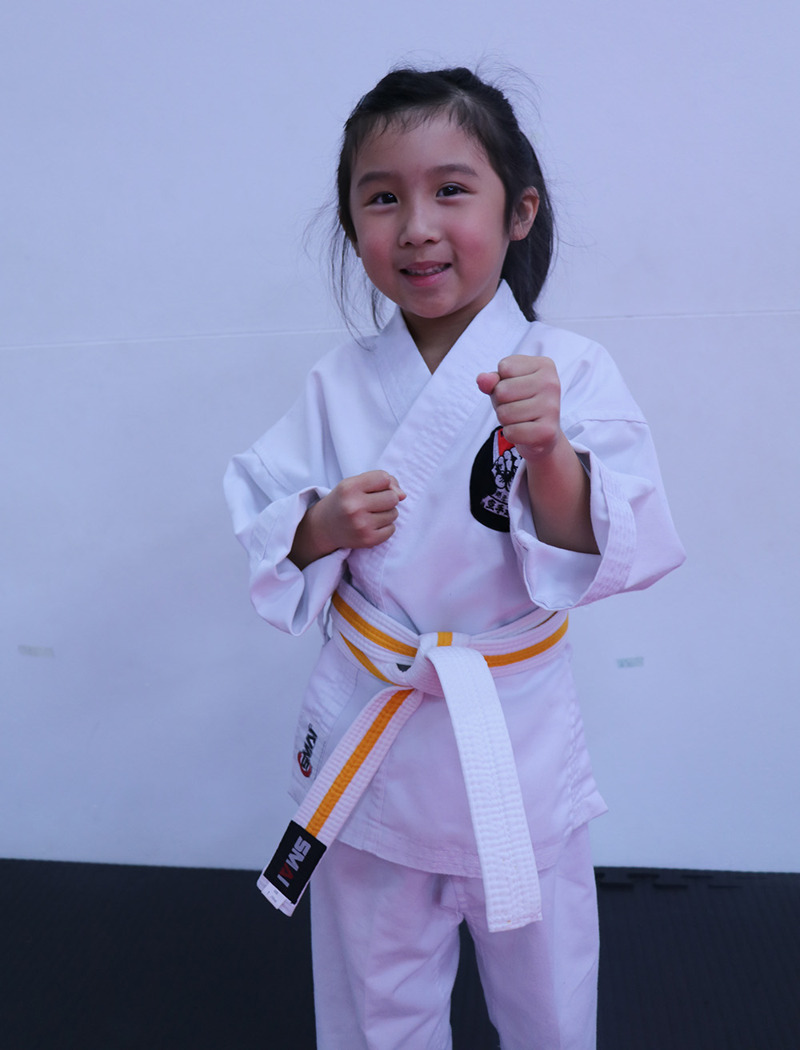 Seeing Antonia (my 5-year-old daughter) and her friends passing the grading exams and achieving a higher level of belts, I am just thrilled. The achievement is worth celebrating. But my contentment is more than that. It is rather a state of happiness and satisfaction seeing the little one being immersed in Goju Ryu Karate’s pedagogy.

Before I had a motorcycle accident and hurt my back decades ago, I had explored a few diffident kinds of martial arts, like Wing Chun, combat Taichi and Fencing. Although they are all good and have benefited me enormously, I decided to let Antonia start her journey of martial art with Goju Ryu Karate.

Goju Ryu Karate is definitely the right choice. It is so not only because Karate is a comprehensive system including punching, elbow and knee works, kicking, grappling and a bit of groundwork, but also for the reason that there is a profound philosophy behind literally everything happening at a Dojo.

Karate Sensei’s always put a lot of effort into teaching discipline. In Karate sense, the meaning of discipline is far beyond classroom management. It is rather a way leading to self-improvement, to which is attained by repeatedly performing various rituals of courtesy.

They might seem to have nothing to do with martial arts while it is indeed sustaining the core elements of Karate. Just take bowing before walking in and out the Dojo as an example. Such a ritual movement highlights a discipline that Karate and even combat encounters, begin and end in courtesy.

The courtesy teaching is deeply based on Bu-Do (武道), the traditional Japanese philosophy of martial arts. The etymology of the word Bu (武) is ‘to stop (止) fighting (戈)’ when the word Do means ‘the way’.

In that sense, Bu-Do actually means ‘the way to stop fighting’. In other words, practising a martial art and taking part in a combat encounter has nothing to do with destroying the opponents. It is rather learning to pursue peace by terminating any violent behaviours of all parties in conflict.

It is so different from what you see in cage fighting tournaments nowadays. A real Karate fighter is always to pursue peace rather than destroying the opponents. That is what Bubishi (which is praised as ‘The Bible of Karate’) emphasizes, as it writes,

“This advice holds an extra special importance for the education of young men who study the fighting traditions. Young men are often known to fly off the handle without reason. A lack of confidence and ego-related distractions are the source of unwarranted aggression…… Misusing their quanfa [拳法，means ‘martial arts’] skills, they develop reputations worthy of criminals and the outcasts of society. As a teacher, it is critically important to recognize such character weaknesses early if one is to prevent such disgrace from occurring.”

To accomplish the ultimate goal of pursuing piece, Karate pedagogy emphasises on discipline. To articulate what discipline really means, Yamamoto Tsunetomo in his Hagakure: Book of the Samurai writes, “How should a person respond when he is asked, ‘As a human being, what is essential in terms of purpose and discipline?’ First, let us say, ‘It is to become of the mind that is right now pure and lacking complications.'”

To purify the mind, here comes another Karate ritual: Mokuso (默想), which is an internal exercise resembling meditation performed at both the beginning and end of a training session. By performing Mokuso, the body and spirit are to be unified with such mental exercise. Mukuso does not equip you with any skills to beat your opponents. However, it provides you with the mental power to engage in the most important battle, which is to defeat yourself.

To defeat yourself is to build a better self. Yagyū Jūbei Mitsuyoshi (柳生 十兵衞 三厳 ), one of the most glorious samurai in the 17th century during Japan’s feudal era, has said,

“I do not know that way to defeat others, but the way to defeat myself.” (quoted in Tsunetomo’s Hagakure) The top fighters always think about self-improvement, rather than beating up anyone else.

Bowing and Mokuso, which are things apparently trivial in their nature while might produce prodigious effects. Antonia is lucky enough to be exposed to its profound philosophy at an early age. I strongly believe that any kids will benefit for life acquiring these important discipline elements. I am so glad that I have made the right decision to let Antonia practice Goju Ryu Karate.

4 class plus a FREE Uniform

The ultimate aim of Karate lies not in victory or defeat, but in the perfection of the character of its participants- Gichin Funokoshi

Join Us For March Open Day